If you made me declare right now where my favorite place on earth was, I would probably answer “Waterloo” I spend a huge amount of my youth there fishing and camping and still find myself there most weekends photographing wildlife and visiting those areas that I grew up in.  I practically wore out a canoe in the back of second creek.  My mother went to school at Waterloo as well, and it just sort of feels like coming home whenever I’m there. I am able to find some quite peace and prayer time there that seems harder to get elsewhere.

When I got the call from Melanie, Rena’s mother, she goes by “Rena” by the way, I was really excited.  After brainstorming about ideas for a few days I came up with one that I was really pumped up about.  However, I have to admit, I may have been a little too pumped up.  I quickly found out from my wife that you can’t ask a high school senior girl to show up on the river bank at daylight…  My bad, but too late for Val, HA!, I’d already scheduled the first session… I wanted to have her on the river bank with the mist rising from the cooling fall waters of second creek with the sunrise just peaking over the hills behind her.  I knew exactly what I wanted but it only happens for a very few minutes and only at daylight, so the timing was going to be critical.

We set out from our home in Colbert Heights and arrived at Waterloo about an hour before sunrise to make sure that everything was just as we wanted it.  When Rena arrived with her family, yep, that’s right she actually showed up… at daylight… we got right to work.  She was awesome in the early morning light.  We worked for a few hours that morning in different settings and got what I thought were some really special shots and we had a blast as well.

If I had to describe Rena in just a few words, I’d have to say beautiful (obviously), fun, talented and focused. Let me start by saying we always had fun during the shooting.  We laughed as much as we shot it seemed, and the shots came so easy with her. She has the kind of personality that makes everyone want to be around her.  Fun is a good one-word description of Rena.

As far as talent goes, I’m not sure there is anything she can’t do well.  Volleyball, Cheer, Softball…. It’s not often you see a catcher who can stand their ground on a hard play at home plate, and then get 1st place in the beauty pageant like she did this year.  Heck, I hear she can even catch fish now… She just might be the perfect girl guys! While there certainly is a lot of natural talent in Rena, a good measure of her success this year comes from her focus.  As someone who relies on a lot of hard work so succeed, I’m always appreciative of those who share that trait like she does.  Her successes this year were largely due to her talent, but there was a lot of hard work put in as well. 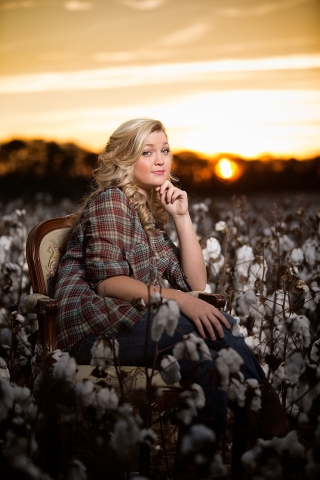 One of the next shoot that we planned was a cotton field shoot at sunset. Again, she was georgeous and I love the look rena has when she smiles with just her eyes.  I’m not really sure how to describe it without showing it so here is a photo from that shoot.  It just make you smile when you see her smile that way.

The photo above is one of my favorites taken in the studio.  I love her eyes in this shot.  She has some of the prettiest eyes of anyone I’ve ever worked with. There always seems to be a sparkle there.

We worked in the studio a few times this year in her softball and cheer uniforms. We captured several shots that we really liked but the one in the catchers helmet to me describes her perfectly.  There is the athleticism and toughness portrayed by the battle scars and dirt on the helmet, but the incredibly beautiful young women behind the facemask with those pretty focused eyes shows the contrast and range of who she is.  To me, this photo best describes Marena. 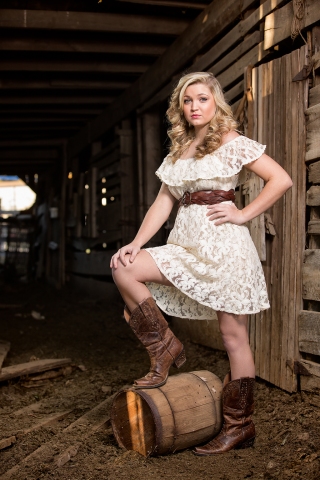 There are a couple of other photos that stand out in my mind as being some of the most special of the year.  The first is a photo of her in a barn that belongs to her grandmother, Susie. (Who is also someone who I think an awful lot of by the way).  Her mother grew up around that barn, so there was some history to this setting.  I love photographs that tell a story so this was a perfect venue to work in. Here is one of my favorites from that day.  I really, really like this shot.

In some of the packages that we offer, we are able to sort of follow them through their year.  We try and make things like games and other events such as Rena’s beauty pageant. I think those are a HUGE part of their senior year and in a couple of our packages we are able to spend the time to be there for them and document these. In this photo below, there was a candid moment when her mother Melanie was helping Rena with her dress.  It was a quiet, unscripted moment that seemed to be a snapshot of the love and support a mother shows her daughter during this year of her life.  Val and I both love the shot and Val says it’s her favorite of the entire year.

I’m lucky to have gotten the chance to work with Rena and her family this year.  It’s truly been a blessing for me.  We’re shooting one more time later this week and while I’m looking forward to it, I’m already missing her a little….